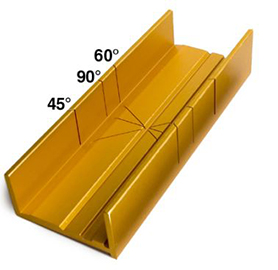 A miter box has two parts to it; a hand saw with small teeth and a box with slots to make accurate cuts. Miter boxes allow woodworkers to easily make angled cuts, usually at 45 or 90 degrees. Miter boxes are especially great for those who prefer to do things by hand instead of using power tools. They are also less expensive than power tools, which is why many prefer to use a miter box and saw. Many miter boxes are made of wood. Zona’s miter boxes are made of aluminum or plastic. The models range in price and quality from a standard wide slot with 2 different angles to much finer slots for more accurate cutting and for use with very fine kerf saws that allow for highly accurate 90, 60 and 45 degree angle cuts.

Some of Our Miter Boxes Include:

How is it Used?

A miter box is used for more fine, delicate woodworking. It is best used to cut small or decorative pieces. Once you are ready to cut a material, you can clamp the miter box to a stable surface, or secure it through nut and bolt. Then, measure your cut length on your material with a triangle or carpenter’s square, making sure to measure the long end. Next, place the material and use the clamps to secure it in place. You can choose which angle to cut your material. Finally, place the saw through one of the grooves one the miter saw and make light cuts until you get your desired outcome.

For woodworkers and hobbyists the miter box is a critical tool to have to ensure your angled cuts are accurate and consistent! You do not have to invest in expensive power tools, it’s lightweight and easy to carry, it makes delicate and accurate cuts, especially useful for intricate designs. If you are interested in purchasing a miter box, check out our full line of miter boxes and razor saws today!

Whether you are a craftsman, woodworker, or simply working on a DIY project – you need the right tools to get the job done. Our razor and coping saws have the quality to help you create a project that looks as if it was done by a professional. For fine, precise cuts every time, the saws and blades from Zona Tools will always surpass your standards.

Our razor saws are  100 percent made in the USA. They are produced in our Connecticut facility and are priced at a bargain considering the quality saw that you get. With a selection of 14 razor saws, our collection can be used for a variety of projects. For jewelers, the tiny and straight cuts that you can make with a razor saw are perfect for making small, precise cuts in wax used in casting. For hobbyists, you can use them on models – such as airplanes or cars. The small teeth on our razor saws are unlike any other saw on the market. They are a tool that should be in every tool box, with their straight and accurate cuts.

side. They are flexible and strong, but will make finer cuts in wood, wallboard, plastic and light metal. Coping saws are used primarily to make curved cuts on thin materials. The blades which range from metal cutting (32 teeth per inch) and  extra fine (24 teeth per inch) to coarse (10 teeth per inch) are made from the finest hardened and tempered spring or high carbon steel with precision punched or milled teeth for accurate sawing, smooth finishes and longer life,  are made in Connecticut. They are a reasonably priced and useful tool to have in your toolbox. Some of the uses of coping saws include: precise sawing of wood, plastic, copper and other soft metals, cutting curves in metal, tile and other strong materials, making decorative carpentry designs, shaping wood, etc.

So, if you are interested in having delicate saws that make sharp, accurate cuts every time, then contact Zona Tools today! For years, everyone from contractors to hobbyists have been satisfied with the professional results from the coping saw and the razor saw. And at a great price you can afford to get multiple tools to complete your collection!

Marketing Manager, Barbara Heilweil of Zona Tool Co. was at the National Retail Hobby Stores Association’s 24rd Annual NRHSA Table Top Expo from May 7-10, 2017 in Las Vegas, NV. No matter what your hobby is— Zona Tools belong in your toolbox.

The National Retail Hobby Store Association Table Top Expo is the premier hobby industry trade event that brings together brick and mortar hobby retailers and manufacturers/distributors from across the country. Hobby retailers come for the innovative products, leading-edge education and unmatched networking opportunities to build sales and improve their businesses. They also get to learn about and demo new products! For Hobby store owners, a couple of days away from their businesses provide an opportunity to recharge, gain new ideas and excitement about new products.

Zona Tools and Blackstone Industries manufacture the highest quality brands of hand tools like razor saws, hack saws and more. We thought it would be interesting to look at a history of hand tools in America, and we hope you enjoy the read!

There were two main axes used in woodworking back in the 1800s. The two were called single bitted or double bitted. The first axe would cut through any bark, and the second axe would be used to cut down a tree. According to Collectorsweekly.com, these axes were used by pioneers to cut through crops and build homes. Many of the axes had one side for cutting and another blunt side with a flat hammer.

These were the new tool in the 1800’s used to cut down trees. They were called misery whips due to the past frustration of using a saw. Misery whips were able to stay sharp, and can be a one-man saw or a two-man saw. These were used for cutting down trees, especially large trees.

This Dutch-shaped saw was made of wood and brass. The ones that came out in later years were not made of such high quality, and were made from steel and cheaper materials. The shape of this handle was not able to be achieved again due to the mass production in factories.

This plane was able to cut precise edges on wooden boards. This was one of the basic bench tools of the 19th century. According to Antiques.lovetoknow.com, these are one of the most sought after vintage tools.

The anvil is a solid block of iron or steel that is used for working with metals, from shoeing horses to jewelsmithing. The metal can be shaped with heat and then hammered to get the desired shape.

From the 18th century, one of the newer tools was the circular saw. With accurate and sharp cuts, the saw was the official tool for getting a job done in minimum time. With a comfortable handle, and a thin blade with teeth, its able to cut through many materials with ease.

The appearance of tools has changed drastically with the invention of the wrench. From gripping objects to fastening knobs and bolts, the wrench was the new useful tool of the 20th century.

The Chainsaw
Finally, a tool with electric power behind it was the chainsaw. This was a portable saw that was able to cut through trees and other tough materials. With spinning teeth, the chainsaw soon became a staple to every craftsman and household.

The Phillips screw made its first debut for the 1936 Cadillac. Invented by Henry F. Phillips, these screws were forced in by a drill. They quickly became popular for everyday things from hanging paintings to drilling pieces of wood together.